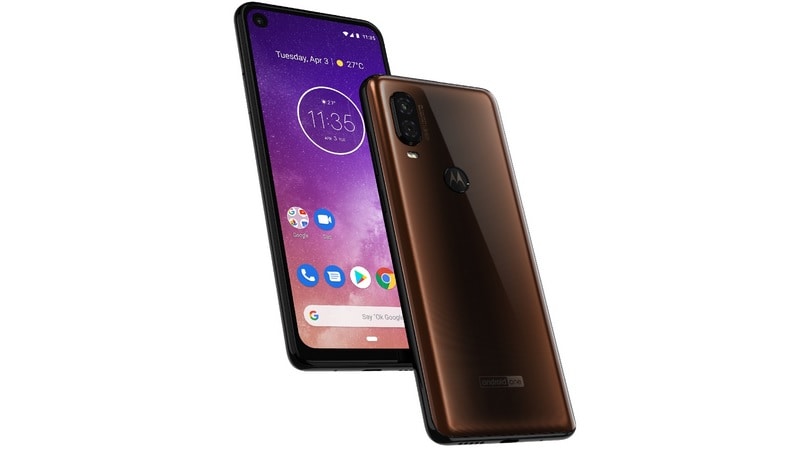 Motorola One Vision has been making rounds of the rumour mill recently and the phone was even spotted on a benchmarking platform last week. Now, an alleged press render of the Motorola One Vision has surfaced online, and separately some key specifications of the phone have popped up as well. Codenamed ‘Robusta2′, the Motorola One Vision’s alleged press render shows a hole-punch display akin to the Samsung Galaxy S10 and a dual rear camera setup. The upcoming Motorola smartphone will reportedly be powered by Samsung’s Exynos 9610 SoC and will be available in multiple variants with up to 4GB of RAM.

The alleged Motorola One Vision press render suggests that it will pack a dual rear camera setup and rear-mounted fingerprint sensor with the Motorola logo painted over it. On the front, the phone can be seen flaunting a Samsung Galaxy S10-like hole-punch display with thin top and side bezels while a thick chin can be seen at the bottom. The display will reportedly have a resolution of 2520 x 1080 pixels with an aspect ratio of 21:9, however, the screen size is not known.

The Motorola One Vision is claimed to run Android Pie and will be a part of Google’s Android One program, which suggests that it will receive the next two major Android updates. The Motorola One Vision’s alleged press render comes courtesy of TigerMobiles, with the source further indicating that the yet-to-be-announced smartphone might be launched as the Moto P40 in the Chinese market. And even though a previous leak indicated that the Moto P40’s design will be similar to the Motorola One Vision, the latter will reportedly be powered by the Snapdragon 675, and not an Exynos SoC.

Earlier this month, a Motorola smartphone alleged to be the Motorola One Vision was spotted on Geekbench packing the Exynos 9610 SoC. Another report states that the Motorola One Vision will be powered by the Exynos 9610 SoC and will come in multiple variants with 3GB and 4GB of RAM, and three storage options to choose from – 32GB, 64GB, and 128GB. The primary rear camera is tipped to be a 12-megapixel sensor that will employ pixel binning to also click photos at 48-megapixel resolution. The Motorola One Vision will also reportedly come with two new camera features developed by the company – “Video 3D HDR” and “Long Exposure”.

As for the front camera, the sensor’s resolution is not known. The hole-punch housing the selfie snapper will be located on the top-left region of the display and will cover an area of 174×167 pixels. The Motorola One Vision is tipped to have support for Google’s ARCore and Digital Wellbeing features, and will reportedly come pre-installed with apps such as Moto Camera, Moto Actions, Dolby audio, Moto Display, and the company’s own photo editor and face unlock apps. As for the battery, the upcoming Motorola smartphone is claimed to come equipped with a 3,500mAh battery, but there is no word on support for fast charging.