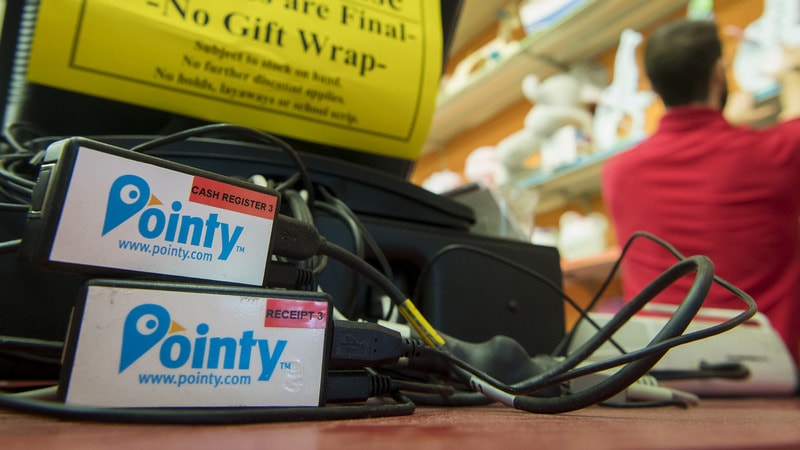 Talbots Toyland used to buy full-page newspaper ads during the holiday shopping season and hope for the best. Now the San Mateo, California, store is connecting with Bay Area toy shoppers on Google’s search engine and attracting customers it might otherwise have never found.

Google for years has offered tools to help small merchants increase their online visibility, but only if those retailers had digital records of what was on their shelves. Like many small businesses, Talbots lacked digital records of what was in stock and never got around to building one for its mammoth inventory of 65,000 products, which include a range of products from Lionel Trains collectibles to the latest must-have Legos.

Then last year the store purchased three devices from Pointy, a Dublin startup that helps independent merchants increase their visibility online and lure consumers who otherwise would shop at eBay or megaretailers like Amazon.com and Walmart, which have entire teams dedicated to being visible online.

The $500 (roughly Rs. 35,000) device plugs into a cash register and, using each item’s barcode as employees ring up sales, creates a digital inventory that is posted online and visible in Google searches along with the retailer’s location. While Pointy’s hardware has been around for four years, it just got more appealing, thanks to a new partnership with Google that lets merchants buy “local inventory ads” that appear in the search results of nearby shoppers. Think of it as a Google Maps for local products.

Talbots, which has been in business for more than 60 years, saw immediate results. Potential shoppers called to confirm that the items they wanted were in stock. Talbots knew these were new customers, since many asked for directions, and the store surmised that at least some of these newbies were tipped off by the advertising generated by the Google-Pointy partnership. Sales are up by double digits this year, which Talbots attributed to this added online visibility as well as the closure of nearby Toys R Us locations.

Pointy already has devices in 10,000 US retail locations and sees plenty of room to grow. Ninety percent of the $5.4 trillion (roughly Rs. 380 lakh crores) in US retail spending this year will happen in stores, according to EMarketer. Those in-store transactions are increasingly influenced by online experiences, which include researching products and searching for where they are available. Many shoppers prefer to buy an item in a store after inspecting it and speaking with an expert than buying it online and waiting for delivery, says Mark Cummins, who co-founded Pointy.

“Most shopping still happens in brick-and-mortar stores, but consumers expect to be able to pull out their phones and find whatever they need instantly,” he says. “Pointy is helping retailers catch up there.”

Cummins started Pointy in 2014 after selling his previous startup Plink to Google in 2010. Plink let users search the web using images rather than keywords. Cummins got the idea for Pointy after a party where he and friends enjoyed craft beer purchased from a nearby market. He wanted to buy the beer but couldn’t remember the name of the store, which got him thinking about how shoppers can search online for products around the world but can’t always find out what’s on the shelf at the shop around the corner.

The low-cost devices aimed at small businesses follow the path of Square, which started a decade ago by selling cheap smartphone plug-ins that let dog walkers and pedicabs accept credit cards. Square processed $65 billion in payments last year and offers additional financial services, highlighting how simple solutions for small businesses can add up to big business.

Pointy is already diversifying its revenue. In addition to selling the device, it helps local businesses like Talbots buy Google search advertising and gets a commission on those sales. Talbots Toys has been spending about $300 a month on Google advertising, which it is increasing over the holiday season, when toy shopping spikes. Digital advertising sales will total $111 billion this year, up 25.7 percent from a year ago, with Google leading the market, according to EMarketer. Pointy could help Google increase that market even further if it encourages more small retailers to buy search ads.

“Sure, shopping online is great for certain things,” says Noel Ruane, a partner at Polaris Partners, which led a $12.5 million funding round for Pointy this summer. “But if something is close by, I’m happy to go and buy it so long as I know it’s there.”

Of course the new system has some glitches. Retailers must manually delete items they no longer sell or have sold out. Pointy works best for items that are constantly in stock; less so for hot-selling toys during Christmas season. As a result, inventory listed online isn’t always up to date, which means some customers who make the trip without calling in advance can be disappointed.

“A lot of people are under the impression that if it’s on the internet it must be true, but most people call first if it’s a hot-selling item,” says Talbots’ Schumacker. “Still, we get customers who say, ‘I drove all the way up here from Gilroy and you don’t have it and Google said you have it.’ So I do my best and say, OK, how about I ship it to you when it gets in.”