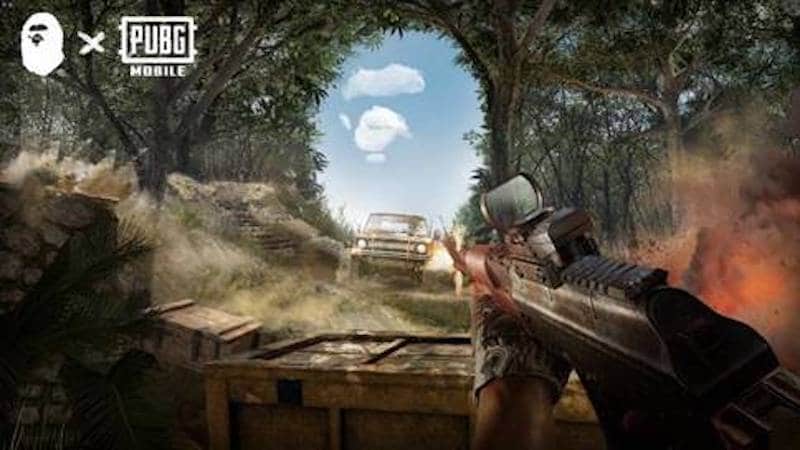 The PUBG Mobile 0.8.5 update for Android and iOS is due this week. While we’re yet to get detailed patch notes on what to expect, Tencent announced a collaboration with Japanese street wear brand BAPE (short for Bathing Ape) for PUBG Mobile that will be present in the 0.8.5 update. These include a BAPE frying pan, a shark hoodie, and other BAPE-branded accessories and items in-game. No PUBG Mobile 0.8.5 update release date has been given aside from Tencent hinting that it would be arriving soon.

This marks PUBG Mobile’s second partnership following one with Mission Impossible: Fallout. While the PUBG 0.8.5 update has been in beta for awhile, no patch notes have been mentioned with the Tencent Community team stating it wants to build anticipation. That said, common consensus amongst those using it suggests that it fixes performance issues that were introduced in PUBG Mobile 0.8.0.

Thanks to being on Android (as well as iOS), PUBG Mobile dominates Asia and China according to data agency SensorTower, with the US making up only 30 percent of PUBG’s revenue. This makes Fortnite’s loss as PUBG’s gain. Particularly in markets that have no access to PCs, consoles, or iOS devices out of cost concerns or personal preference such as Asia where Android rules supreme.

Aside from being on Android, PUBG Mobile is no slouch when it comes to bringing new features to the game, receiving updates aplenty ranging from visual improvements, the Royale Pass (PUBG Mobile’s equivalent of the Fortnite Battle Pass) and even seasonal events. Plus, it’s exceedingly well optimised — to the point where the game run brilliantly even on low-end smartphones. Fortnite on iOS, while serviceable, doesn’t run as smooth as it could on anything that’s not the latest hardware from Apple.