Oppo is set to expand its smartphone portfolio by launching the Oppo K1 in Shanghai, China on October 10. The Chinese company has confirmed the new development through a couple of teasers posted on Weibo. The new smartphone, which is expected to have an in-display fingerprint sensor and a waterdrop display notch design, recently surfaced on TENAA as a suspicious new smartphone by the company with a 6.4-inch display and an octa-core SoC. The TENAA website showed three different variants of the Oppo K1, though the official teasers don’t reveal any details around the distinct features available through the different variants. Oppo has separately teased the launch of a Hyper Boost technology that could enhance the overall performance of its future smartphones – perhaps similar to Huawei’s GPU Turbo tech. The new technology could be a part of the Oppo K1, though it could debut on other models over time.

As confirmed through the teasers posted on Weibo, the Oppo K1 is set to debut on October 10 along with an in-display fingerprint sensor and a waterdrop design. One of the teasers also suggests that the Oppo K1 will be priced between CNY 1,000 and CNY 1,999 (roughly between Rs. 10,750 and Rs. 21,500). This is significantly lower than the premium offerings, including the Vivo Nex and Xiaomi Mi 8 SE. 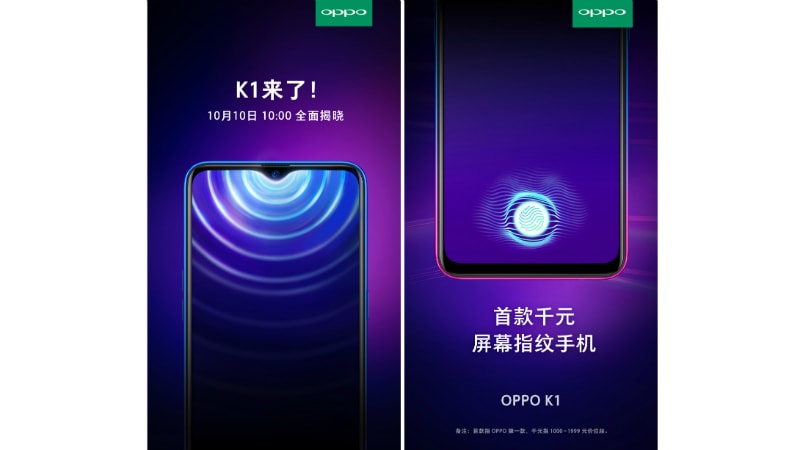 If we look at the TENAA listings, the Oppo K1 will come with a 6.4-inch full-HD+ (1080×2340 pixels) AMOLED display and will come with an octa-core SoC clocked at 1.95GHz. There could also be a dual rear camera setup along with a 16-megapixel primary sensor and a 2-megapixel secondary sensor and a 25-megapixel selfie camera. The TENAA listings also revealed Android 8.1 Oreo and 3,500mAh battery.

The dimensions of all the Oppo K1 variants surfaced on TENAA are the same with 158.3×75.5×7.4mm of measurement and 156 grams of weight. However, there are likely to be some distinction on the RAM and onboard storage front as the TENAA site showed the smartphone in 6GB RAM and 64GB storage as well as 4GB RAM and 128GB storage option.

The TENAA listings didn’t reveal any details around the chipset powering the Oppo K1. Nevertheless, a listing on Geekbench has apparently showed the handset with a Snapdragon 660 SoC.

Ahead of the formal launch of the Oppo K1, an alleged image showing its frontal panel has been leaked. The image, as shared by Chinese site MyDrivers, shows the waterdrop display notch of the upcoming Oppo smartphone. It also highlights the thin bezels surrounding the display panel. The overall design spotted in the leaked image shows some similarities with the Oppo R17 that was launched in August with a waterdrop notch. 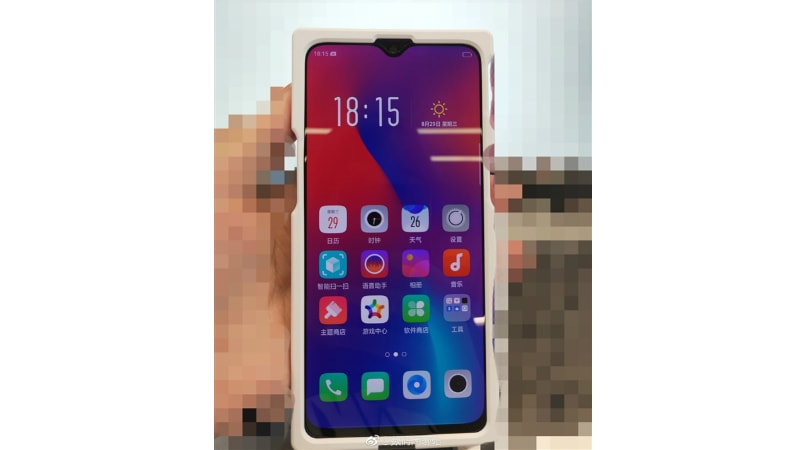 Separately, Oppo has released a teaser through its Weibo account that shows the debut of its Hyper Boost technology on October 11. The technology, which is touted to bring overall acceleration, appears to be an answer to Huawei’s GPU Turbo that accelerates the performance for heavy usage. Furthermore, it is expected to come preloaded on the Oppo K1 since it is launching alongside the handset at the Shanghai event. The official teaser shows that there will be a dedicated briefing about the Hyper Boost technology where all its features are likely to be detailed. Meanwhile, you could expect some leaks related to the Oppo K1.