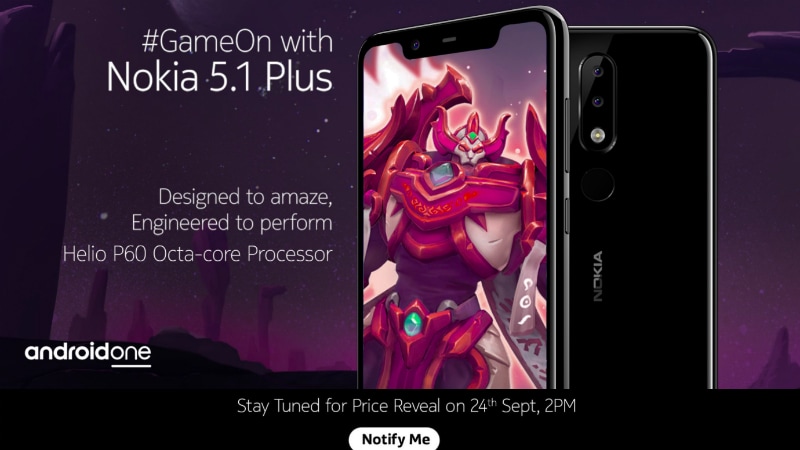 Nokia 5.1 Plus was launched in India back in August this year, however the Finnish phone maker did not reveal exact price in India and availability dates for the mid-ranger. Thanks to Nokia’s retail partner, Flipkart, we now have an update on the same almost a month after the launch. India pricing of the Nokia 5.1 Plus will be revealed at 2pm IST on September 24 on the e-tailer’s website. To recall, the Nokia 5.1 Plus is a rebranded version of the Nokia X5 and comes with features such as a vertical dual rear camera setup, a powerful Helio P60 SoC, and a 19:9 display with notch.

Nokia 5.1 Plus price in India

The development comes to us through a landing page on Flipkart’s website. At the India launch event in New Delhi last month, Nokia did not reveal exact pricing information however it did mention that the phone has a global average price of EUR 199 (roughly Rs. 16,700) excluding taxes and subsidies. Hence, the smartphone could get a price tag of anywhere between Rs. 15,000-20,000 in the Indian market next week. The phone will be made available via Flipkart and Nokia online store in Gloss Black, Gloss White, and Midnight Gloss Blue colour options.

In the camera department, the Nokia 5.1 Plus bears a dual rear camera setup with a 13-megapixel primary sensor and a 5-megapixel secondary sensor, coupled with PDAF. f/2.0 aperture, and an LED flash. On the front, the handset sports an 8-megapixel selfie camera with f/2.2 aperture and 80.4 degree wide-angle lens. There is 3,060mAh battery under the hood.